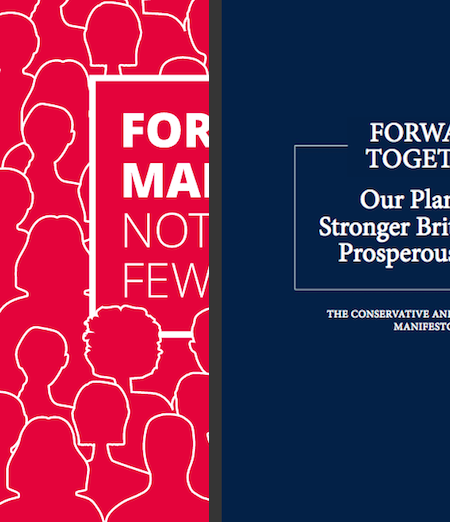 Launching the 2017 Conservative Party election manifesto, Theresa May said that people are not ideological. That is to say that they are not wedded to theory, beliefs or ideals. I’m sad to say that she may be right. Former staunch Labour voters in the north are considering a switch to the Tories. That would have been enough to prompt a fist fight in the past. But not so now.

May’s speech is a remix of the individualist theory of Margaret Thatcher’s ‘no such thing as society’ speech, but applied to political thought rather than community. This is hardly a surprise, as this election (and UK politics in general) has been devoid of ideas.

The Labour Party manifesto is strangely lacking in ideas as a whole. This is not wholly unlinked to the problem that Labour has with its supporters knowing what they don’t want, but not what they do want. So, the manifesto is largely a rolling back of past legislation. Some of the ideas are laudable, but it is hard to sell reversion as anything but a harking back.

The Conservative manifesto is arguably more lacking in substance, but it does at least approach something novel in its attempt to rethink the way that social care is paid for. A 100% death duty on anything over £100,000 will pay for carers for the ill and the elderly where people need it. The burden falling squarely on those who use carers (or, more accurately, their children). It’s a safe and steady income stream for private healthcare companies and the financial sector.

It’s clever and it looks like accountability. In effect it is simply a gamble on future price rises of both housing and care. It could also unrealistically raise expectations of service, in much the same way that university fees have with education. Just ask any senior lecturer.

Of course, the biggest idea in UK politics of the last decade has been Brexit. It was simple, it was shouty and it was radical. It was also a stupid idea. But that has never stopped ideas from being popular. Everything since has paled in comparison.

The NHS and selling off council housing were big ideas, but both main parties have struggled to find anything to compare. This may be as much a signifier of the paucity of quality leadership candidates as it is a paucity of thinking. But one undoubtedly leads to the other.