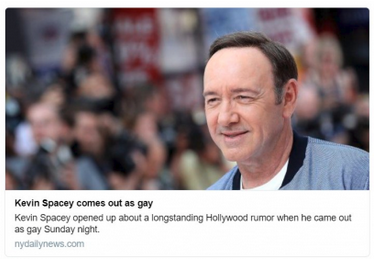 Kevin Spacey’s PR team must have been initially pleased with themselves as the story broke over his alleged sexual assault of a a then 14-year-old Anthony Rapp. Their client was accused of pretty much the worst thing you can be accused of, yet the initial headlines were about Kevin Spacey coming out as a gay man.

Spacey’s team had time to strategise, write and re-write, prepared by months of rumour and some solid Twitter accusations. They then waited for the bomb to drop, ready with their own even larger ammunition, which would pack an even bigger bang. Spacey’s sexuality was barely a secret any more, but they knew that this was still a huge story about a much-loved and respected actor.

Initially, this strategy worked. Sexual assault was not in the headlines or the opening paragraph in many stories on major news networks and newspaper websites. Instead, we were presented with an actor struggling with his identity and sexuality. The assault was dismissed as a drunken incident. Insignificant and long-since forgotten.

But this is 2017. Comment is instant and networks can gather and react fast. Within minutes of the headlines, Twitter was awash with condemnation of the strategy. 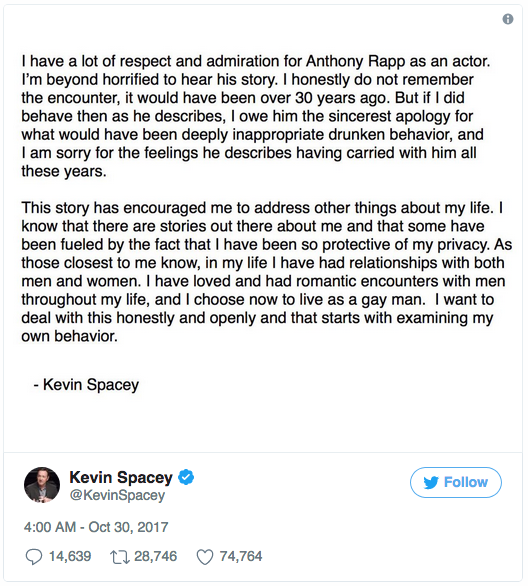 Spacey had tried to conflate his actions with his sexuality. This was a step too far for commentators who had seen this kind of thing in the 1970s and  1980s, when the tabloid press was only too willing to confuse being gay with being a pederast or paedophile. Similarly, younger LGBTQI tweeters were dumbfounded by Spacey’s conflation.

In short, this was a very short-term win that turned into a long-term disaster and a lesson in how not to do disaster PR in 2017. The centre held. But only for about 30 minutes. This was a landmark in public relations. A tipping point. This was the day that everyone could suddenly smell bullshit.

It wasn’t long before journalists and columnists could smell blood over this rather unpleasant stench, with everyone from the Sun to the Guardian publishing columns slating Spacey’s tactics. The picture in the US media was much the same.

Before too long, Netflix was distancing itself from Spacey and others were following. The strategy had not only failed, it had spectacularly backfired. Within hours, people were speculating as to just how much Spacey was like his character Frank Underwood in House of Cards. After all this was almost an Underwood play. ‘There’s no better way to overpower a trickle of doubt than with a flood of naked truth.’

So far so bad for Spacey, but this was a sea-change moment in PR too. The public have already become accustomed to President Trump dropping bombs (sometimes literally) to deflect attention away from a crisis, with Spacey’s team illustrating  how that works outside the Whitehouse. Much active crisis management from PRs will now result in them being called out for ‘doing a Spacey’, damaging both agency and client alike.

New ideas and new strategies will now have to be called upon in even the smallest crisis where saying nothing and going on a long holiday is not an option. PR now has its own crisis to manage, which could easily snowball. To quote Francis Urquhart (the original House of Cards lead in the 1990 UK version): ‘Nothing lasts for ever. Even the longest, most glittering reign must come to an end some day.’